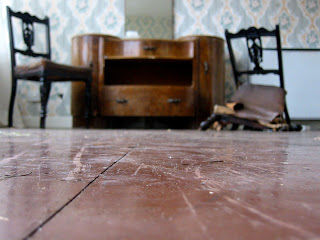 Over 7 weekends in autumn 2010, a unique series of 7 Live Art "Acts" set out to deconstruct private space and social reality, under the watchful eye of a participatory guest audience.

7 Quiet ACTS OF DOMESTIC VIOLENCE has now come to an end and the door to 58 Shelmerdine once more closes.

Tanya Cottingham, the tenant, artist, instigator, and curator would like to thank all those involved in this extraordinary venture.

Posted by Shelmerdine at 07:23 No comments: 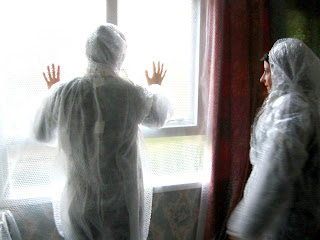 In response to the ever increasing concerns of heath and safety regulations imposed by institutions, an entire home is symbolically wrapped, the space, the furnishings, even the guests. This epic installation uses packaging suggestive of the restrictions that these rules create. By wrapping the space and the viewer each is protected from one another in an attempt to resolve any potential risk...


Catriona Robertson is an emerging artist recently graduated from Central Saint Martin's where she specialsed in Sculpture. Catriona has exhibited and performed in venues across London including Bankside Gallery, Mumford Fine Art, 93 Feet East, the Foundry, the Queen of Hoxton, 491 Gallery, Trinity Buoy Wharf, the Wallis Gallery, Cochrane Theatre as well as on the Turbine Hall Bridge (Tate Modern) at the Raw Canvas Tate Takeover event in October 2009.

Posted by Shelmerdine at 06:57 No comments: 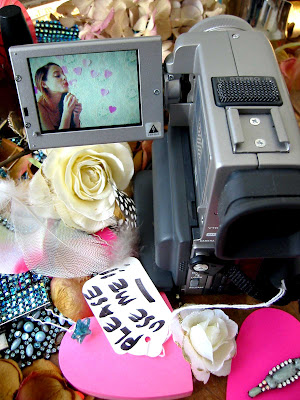 ...at that hour, (an autumnal afternoon), we are not sure she knows we are there. watching. we wait. she disbelieves in herself.  she applies a set of masks in the rooms that manifest her as a masquerade. Upstairs, she is hyper-delight. Uber-woman, all veneer. The kitchen and boudoir demand it of her. The stair leads down towards her dark failings. We descend, following guiltily.

Tanya Cottingham left Middlesex University with a BA in Fine Art. After realising her mistake she set up the collective LOSS OF FEELING AND/OR SENSATION running the month long Soup of the Day in Brixton Village Market in 2004 (with thanks to ASC Studios and Arts Unwrapped), Baptism 2005, The Laundry 2006 and Art Monopoly 2007. She has worked with and designed for: Punchdrunk, The Hobbs Factory, High Tide Festival, Thorpe Park and many more. She has designed public art works for county councils and currently instigates fringe happenings in her Bow Arts flat. The first event there was HOUSEWARMING in 2009. Followed by 7 Quiet ACTS OF DOMESTIC VIOLENCE.
Posted by Shelmerdine at 06:52 No comments: 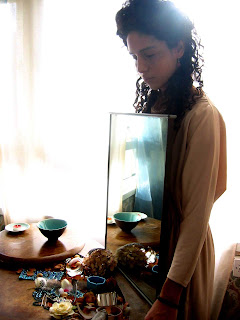 Home Alone: The past most comes to haunt us in the privacy of our own homes. These ghosts, ever present, but most visible at twilight, bring us love, disgrace, fear, anguish, and comfort. The bi-oceanic performance group Helsinki Syndrome offers you the opportunity to spend the afternoon home alone.

Posted by Shelmerdine at 06:50 No comments: 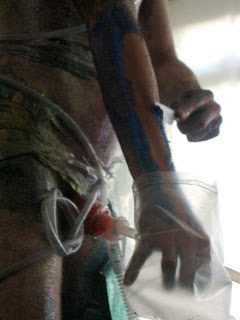 Hospital at Home reflects on the discipline and brutality of modern medicine which aims at cure through discipline. For those with chronic illnesses the home is not only a place to live but also one, like the hospital, in which a disciplined medical regime is imposed with often painful treatments taking place. Hospital at Home is a four hour site responsive performance taking place in a flat which is soon to be demolished. The flat is filled with excessive images of destruction performed by Martin O'Brien, conversant with those of the hospital and beckoning towards the inevitable fate of the flat and ultimately the bodies that occupy it. Hospital at Home examines the fear and stigma associated with medicine and hospitals through a transgressive presentation of the body, disrupting the binaries of health and illness.


Martin O'Brien's practice focuses on physical endurance and excess in relation to the fact he suffers from Cystic Fibrosis, a severe chronic disease in which the body produces excess mucus that, amongst other things, works to restrict and prevent breathing through clogging up of the airways and lungs.

O’Brien’s practice includes a daily regime designed from imposed medical treatments and preparatory exercises for his work, investigating the convergence between the condition of his body and his body based performance practice.

Martin O'Brien has performed in venues in Britain, Poland, Germany, Spain and Norway and his work has been described in Real Time Australia as ‘Utterly compelling… a real tour de force’. He has recently run a Live Art Development Agency (LADA) DIY 7 project entitled ‘Altered States’ at Colchester Arts Centre and is currently working on a new commission from LADA as part of Restock, Rethink, Reflect 2: Live Art and Disability. He was a contributor to ‘Victim Art: Plague, Performance and Metaphor’ as part of Ron Athey’s residency at the centre for the history of emotions (2010), Queen Mary University London and artist in residence at Gallery Art Claims Impulse, Berlin in 2008.

Martin's work will be documented through a series of artists pages in a special forthcoming edition of Contemporary Theatre Review on Live Art in the UK. He is currently engaged in an AHRC funded PhD at the University of Reading on endurance based performance.

Posted by Shelmerdine at 06:48 No comments: 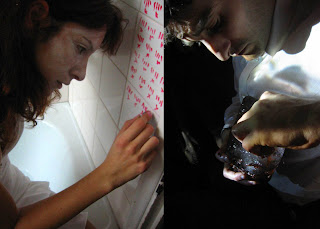 I know this, I do this all the time (I don't like it though)

An interactive Live Art installation by the aswespeak project

This piece is an investigation of the manifold faces, masks and skins of our individuality and identity in relation to the "Other". It questions how the contemporary urban environment restricts real human interaction and explores it’s effect on our ability to process information and attempt expression. The artist explores the fragile connection, or violent disjuncture, between the experience of the body, and the perception of the “Other.” The piece unearths the patterns that shape the space of the self, the messages and images that invade, embed and collude on our encounter with the Other. The Main tool of this piece is a device, which allows the watcher to draw on a piece of paper while her/his action is recorded and projected on the performer’s visage. The doer, over a period of three hours, collects each of the audience’s drawings which gradually overtake her private territory...with dire results.

Xristina Penna has been working internationally as a designer for theatre, opera and performance, as an art director and performance maker. Her practice consists of creating visual environments by blurring contemporary reality with dreamy states that relate to the uncanny and focuses on the reality of living within an urban landscape and its impact on our ability to process information and attempt expression. Her work is cross-disciplinary and has as principal focus to create a collective, archetypal language that communicates visually

Currently, Xristina is:
:- the artistic director of the aswespeakproject creating mixed media and installation work.
:- Creator/designer with associate artist Julieta Kilgelmann for I Know This, I Do This All The Time (I don’t Like It Though), an interactive performance installation, Shunt Vaults and Area 10 London 2009, Byzantine Museum, Athens 2009, Benaki Museum of Modern Art, Athens 2010 as part of Locus Solus by Outofthebox Intermedia.

Previous  works:
:-Site specific designer for Black Tonic by The Other Way Works, Manchester 2008. :-Designer/associate artist for A Kiss From The Last Red Squirrel by Elyssa Livergant and Rough Memory, CPT, Shunt Vaults 2008, Spill Festival 2009. :- Founding member of Poemstomyotherself, a collective of visual and theatre artists: artistic director/designer for Holes by Gabriella Svenningsen, Round Chapel, London 2007. :-Event designer for Metropolis by Future Cinema, Fabric, London 2006.
Xristina has an MA in Scenography from Central St Martin’s College of Art and Design and a BA from the School of Drama, Aristotle University, Thessaloniki, Greece.

This is a private tea party. It is subjected to transformation and transition of space and its extention via internet and pervasive technology. Bringing the public into a private tea party transforms and extends the tea room. The room changes and the rules change with it.The rules and actions are repeated every 20-30 min. However each time brings a different element which develops the work as a whole.
The interchanges are made with cardboardboxes and with the usage of diferent interfaces and websites such as Facebook and blogging.

You can join our party either via a private invitation to the tea party or online.


Hedva Eltanani and Sara Gianfrate graduated MA Advanced Theatre Practice from Central school of Speech and Drama. They are questioning the space and the places in between them. Using digital technology they explore the extension of space and of live performance. Hedva presented her research in Reading University, Brunel University, TaPRA conference in Cardiff University. She collaborated with companies such as 19;29, Ashes and Diamonds and Flying Dutchman. Sara's recent collaborations include: ‘The Duchess of Malfi’ by Punchdrunk;‘We don’t own it’,Laban Institute a device installation based on collecting memories;‘The Cherry Orchard’ by The Galleon Theatre Company  and‘Crime and Punishment’ by Ashes and Diamonds

Distinct from our prescribed social roles based on the utility of space present in other public and private environments - visitor, customer, employee, traveller - the realm of home primarily demands that we simply exist within. Thus occupation becomes the raison d'etre for the domestic space and with it the martial connotations that accompany it. What happens when 'home' becomes a stage, a set, a battleground?

This Live Art performance explores the notion of anonymity in the city through the body and the virtual.

Posted by Shelmerdine at 06:39 No comments:

The Intimate, The Unspoken,
The Remembered. 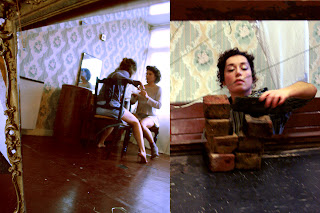 This place is not real. It is a half-dreamed network of exhumed memories and desires perforating the thin film of assumed reality. The walls are falling, the paint is falling, the chairs are falling. If you step inside can you read the map(s) left behind? If you listen carefully can you hear the walls whisper their secrets?
This is the story of a handkerchief, the moon and two cups of coffee forgotten on the window ledge or what happens when loneliness sinks into the flesh.
This is the story of a man is wandering through his archive of remembrance and forgetfulness.
This is a story of a woman who has lost her name and too much dirty laundry.
This is the story of a moment we once shared.
Posted by Shelmerdine at 06:12 No comments: